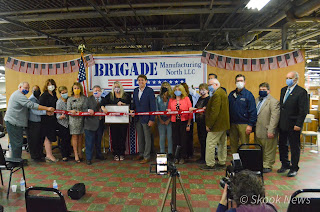 On Tuesday, the Ashland Shirt Factory’s new owner, Brigade Manufacturing North LLC, held a ribbon cutting ceremony to officially reopen the factory with the help of the Schuylkill Chamber of Commerce.

In June, the factory’s previous owner, Gitman and Co. announced that they would be closing the facility in August after being in operation since the 1960’s.  The closure set up 90 staff members to lose their jobs.
After the announcement was made, with the help of United States Representative Dan Meuser and the Schuylkill Economic Development Corporation, Brigade Manufacturing stepped in and showed interest and moved into the facility in late September with the focus on creating apparel for the United States Postal Service.
The ribbon cutting held Tuesday, gave representatives of the company as well as community leaders to express their gratitude and making the switch from Gitman to Brigade so quickly.
Schuylkill County Chamber of Commerce President Robert Carl opened the ceremony and introduced company Vice Chairman Richard Holcombe
“The people that work here are not sewers.  They are tailors and craftsmen, they care so much about the product that our client came up and did an inspection and said we were the cleanest client and product was the best he has ever seen.  And when that comes from a Berkshire Hathaway Company that means a lot to us.”
Holcombe introduced the team that would be helping run the plant which included employees from the previous operation.
Holcombe introduced Michelle Good as the Vice President of Finance after announcing that the company will be moving their financial department for the entire Brigade Company to Ashland.
Holcombe also introduced Ann Barwicki, the new plant manager who has had experience working in human resources, payroll, and purchasing for Gitman.
Barwicki introduced the rest of her team which included sewing supervisors Kathy Kriesher and Wanda Shadle.
Holcombe then introduced President of Brigade Manufacturing, Jamie Davenport.
Davenport spoke on the company’s focus on the military and uniform shirt market and also spoke on three things that need to be done during the pandemic.
Davenpoint said “We need to feed our population, we need to produce medication, and we need to produce clothing and we intend to help out with the latter”.
Also speaking during  the ceremony were the Schuylkill County Chairman of the Board Shannon Brennan, Senator Pat Toomey’s Regional Administrator Marta Gabriel, Representative Dan Meuser, Schuylkill County Commissioners Baron Hetherington, George Halcovage, and Gary Hess, Senator Dave Argall’s staff member Mary Beth Dougherty, and Mayor of Ashland Ray Walacavage.
Holcombe returned to the podium and asked Davenport and the Regional Director of the Union Patrick Jones Sr. to come forward to sign the union agreement.
Holcombe said along with the purchasing of the facility, the company was able to keep the union contract the same for the employees of the facility.
Lastly, before the ribbon cutting, Davenport and Holcombe presented Plant Manager Barwicki with a placard that stated “Let’s Go Postal!” in recognition of the facility’s focus on postal service attire.
After the ribbon cutting, Plant Manager Barwicki provided a tour of the facility and showing some of the new equipment and old equipment that will be used at the facility.
Approximately 50 employees are currently working at the plant and has been working on the first order which is expected to be shipped out of the facility on Wednesday.